The Cybercrime Report released this week examines the global fraud landscape and reveals that LexisNexis’ Digital Identity Network recorded 16.4 billion transactions from January to June. Of these, 277 million were human-initiated attacks, a 13 percent increase over the second half of 2018, said LexisNexis officials.

The research also uncovers an increasing level of networked crime, which are networks that emerge when digital identities are associated with confirmed fraud attempts across more than one organization.

“Organizations within the same industry, particularly banking, lending and stock brokerage, are most acutely affected,” according to a summary of the findings.

“Fraudsters no longer operate in silos, they are attacking across industries and organizations," said Rebekah Moody, director of fraud and identity at LexisNexis Risk Solutions. “As seen by a detailed example in the report, one fraudster can carry out a large number of transactions against a series of global organizations using a single mobile device.” 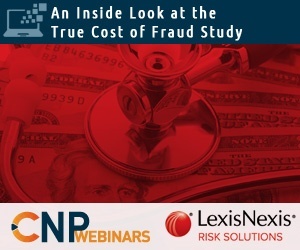